Luis Scott-Vargas is a professional Magic player, member of the Magic Hall of Fame, and Vice President of Marketing at ChannelFireball.com. He hails from Oakland, California, and is widely considered to be the greatest Magic troll of our generation.

In this in-depth conversation, we discuss:

Listen to it here:

James:  Do you and your brothers look physically similar? I’m only asking because you’re well-known online for being a master troll. Maybe I’ll say humorist—

James:  [Laughs] Ok, I wasn’t sure if I was going to offend you. But I was curious if your brother Antonio ever followed in your footsteps and maybe posed as Luis Scott-Vargas at some point in time.

Luis:     No, he hasn’t done that. Though our family, especially on my dad’s side, it’s where it [the trolling behavior] comes from. We are all very much like that. The trolling genes do run pretty deep. I remember my dad’s brother, my uncle, got me a box of cereal for Christmas. There’s a toy inside it. I opened it, and it was a box of Cheerios. And as a seven year-old kid, I didn’t find that very amusing.

James:  Oh my gosh, that must have been very traumatic.

Luis:     Yeah, Christmas is a big deal when you’re seven years old. And Antonio had been singing the song, “All I want for Christmas is my two front teeth.” Just some Christmas jingle, so he received two teeth on a keychain. It was just like… [Laughs]

James:  Oh my gosh. Was there also a note in there that said, “Santa Claus is not real?”

Luis:     There wasn’t. But I think at that point we knew Santa wasn’t real. I don’t remember which Christmas this was, but all I know is that we got enough of this growing up that I think me and Antonio are on the trolling side. My youngest brother, Miguel, is not really, though.

Luis:     I think that the biggest thing I got from my parents was understanding what truly mattered. My dad quit a job that paid a lot of money, as a chemist, to be a teacher, which does not pay a lot of money. He made the transition because he didn’t like what he was doing, and he wasn’t passionate about it.

That’s one of the biggest things I’ve learned, is following what you’re passionate about. I mean, within reason. I really hate when people are like, “Just follow your dreams and it will all work out.” It won’t, it doesn’t always work out. Often it does not work out. To be successful, you have to be very lucky.

But I think another good part of that too is—try to follow what you’re passionate about. Or, don’t make decisions based on just money. Don’t get bribed to do something. And that comes with a healthy dose of privilege that you’re in a financial situation where you can pick and choose what you want to do. Or you can take a job that pays less because you’re still making enough money to get by.

Obviously, people have to do what they have to do. But I think if you can afford to do so, it’s really good to not make decisions solely based on what is the most financially lucrative, because there’s a lot more that goes into life and what you do other than that, and I think that’s something that came through very strongly in my upbringing.

Neither of my parents ever really cared about money intrinsically very much. They made sure me and my brothers were fed and clothed, and we never wanted for anything. But my parents, more than that, didn’t care about accumulating wealth and didn’t make a lot of decisions based on that. And I found that to be a pretty valuable perspective. Because there’s a lot of things that it takes to live a successful, happy, and well-balanced life, and money is one of those things, but it’s not the only thing.

On starting a Magic-related business, and showing up

James:  What are some things about starting a Magic-related business that people may not necessarily know?

Luis:     One is, what are you doing to differentiate yourself? Because it’s all well and good for me to say, “Yeah, we did draft videos and set reviews.” Yeah, ten years ago, there weren’t those things, or there weren’t enough of them. That’s not true now. If Channel Fireball were to launch now, it would not succeed, right? Because what would we be offering that’s not offered by dozens of places at this point?

So you want to be bringing something new to the table. Another is, you really have to have follow-up, consistency. One of the biggest things that we always hear as podcasters — because I also have a podcast, Limited Resources — and we talk to a lot of aspiring podcasters who have this great idea. A great idea doesn’t matter as much as showing up and doing the thing. It does when you’re talking about a business, because a business is trying to fill a particular niche. But when you’re doing something like a podcast, showing up and doing it, and being consistent, is way more important.

Because anyone can have an idea and do two episodes. The question is, do you do seven episodes, ten episodes, twenty episodes, and at that point, have you hit a groove, have you started building an audience?

It’s the same as streaming. Yes, you do need something to differentiate yourself because there’s so many streamers these days, but showing up and being consistent is one of the ways to help build an audience.

On the legends of Magic streaming…and Paul Cheon

James:  You talked about how streaming plus Arena—that’s how it brings more personalities into the mix, folks who’ve always played Magic but didn’t stream. How about streaming as a whole? Every day I visit Twitch, I can see all these Magic streamers on my front page. How do you see that evolving, in terms of the streaming experience? Both for viewers and also for streamers.

Luis:     I think Magic—there were Magic streamers before Arena. You had Paul Cheon as one of the earlier ones, Kenji NumotTheNummy is still very successful, Gaby Spartz—

The Humans of Magic book is out!

(How to WIN A FREE COPY of the book — instructions below)

12 interviews with 12 of the greatest minds in the game today. We get philosophical, personal, and deep. Get your copy on Amazon now.

After working on the book for more than a year, I am truly excited to get this thing out. It is absolutely jam-packed with content: 500+ pages, with illustrations and an exclusive foreword by Autumn Burchett.

I couldn’t be more excited to release it in written form. It would mean the world to me if you would consider picking up a copy.

How do I win a FREE COPY of the Humans of Magic book?

[Subscribe to the newsletter to win + get a special preview of the book!] 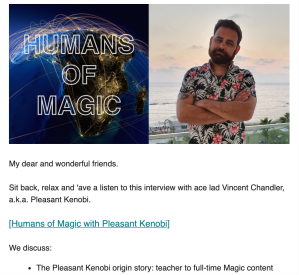 James Hsu is a content creator, author, and entrepreneur. He is the co-founder of two companies: Stream Sage and CardBoard.Live. View all posts by James Hsu